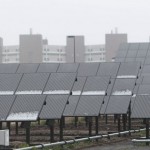 $9.5 million in savings expected over 20 years.

Erie County wants SolarCity and another developer to build two of the biggest solar arrays in the Buffalo Niagara region on vacant county-owned land near the Alden Correctional Facility and near the county’s wastewater-treatment plant in Angola.

The proposed solar arrays would have the capacity to generate as much as 6 megawatts of electricity and could save Erie County an estimated $9.5 million over a 20-year period, according to an analysis by a consultant hired by the county.