SolarPark Energy [ Read Article ] wants to make a $7,500,000 investment in a solar park on an 18 acre site in Grand Island. The first solar farm will generate enough cheap electricity to power 800 homes! Enough power for half the town’s residents is expected. Grand Island homeowners can buy the energy from a third party!

Two articles, [ Click Here ]  two days in a row, and no mention of a P.I.L.O.T. program in Grans Island!

The entire Erie County Real Property Tax Comparison can be viewed at:
http://www2.erie.gov/ecrpts/sites/www2.erie.gov.ecrpts/files/uploads/Erie15-16%20Tax%20Comparison.pdf

Data from the US Census shows that Evans is losing population while Grand Island is gaining population.
[ Click Here ] These are 2015 statistics from BEFORE the HUGE town tax increases of 2016 and 2017.

The fight over the solar tax is just one reason why Evans and Grand Island are headed in opposite directions. 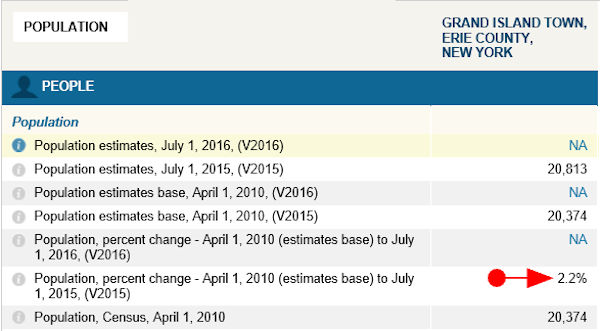 DO YOU SUPPORT SOLAR FOR EVANS?